A selection of unique and unmissable tours to get to know Milan and all its beauties.

For all tours the meeting point is Infopoint YesMilano, via dei Mercanti n.8.

It is recommended to register, if you have not registered, please arrive at the meeting point 5 mins before the start of the tour.

The tour will be in English or in two languages (Italian and English) ​​if there are also Italians.

The cost is 12 euros to be paid in cash to the guide directly before the tour starts.

How can we get from Cordusio to the Sforza Castle ? Not only straight down via Dante.

The tour that connects two symbolic places of the city such as the ancient Piazza Mercanti, a stone's throw from the Cathedral, and the Castello Sforzesco, will be an opportunity to discover the history and transformations of the beating heart of the city but also to delve into the network of alleys which until the end of the 19th century were the ones that were used to connect the two important city points. We will immerse ourselves in the Sforza ceremonies, among the weapons and loves of the most elegant court in Northern Italy, we will discover the richness and worldwide fame of the districts of crafts, testimonies of the creative and tenacious Milanese industriousness, in the past as now, up to walk the pedestrian via Dante, an elegant showcase of the social and architectural turn of the century.
Between cafes and architectural experiments, theaters and spectacular buildings, we will cross the city center in space and time.

The center of the city reveals, to a curious eye, many relics of Milan's unexpected past.

So let's follow the more or less hidden testimonies that the city continues to offer us.

The route will take us from the origins of Mediolanum, a quiet provincial town to the glories of the capital of the empire.

A journey to discover that the Roman spirit of Milan is much more alive and contemporary than we think...

December 8 and 10: The historic cafes of Milan, shops of flavors and traditions

In a contemporary and eclectic Milano, despite the various changes that have taken place in the last centuries and decades, it is still possible to discover that world of coffee and pastry shops that characterized the city between the 1700s and the 1900s.

Between past and present, the historic shops will revive the sweetest and most political vision of the city. Aristocracy, bourgeoisie, conspirators, writers, Belle Époque reveal step by step customs, interests and actions conceived and put into practice in various local citizens.

During the visit, numerous anecdotes will lead you to re-immerse yourself in the daily life of the past, to remember Milanese specks captured by different writings and paintings.

The history of coffee will also be rediscovered, a new and precious ingredient, fundamental for the invention of a new drink that upset Western habits.

Finally, we will underline the history of Panettone, a dessert so well known but with legendary and distant origins.

Historical-artistic walking-tour in external, from Cordusio Square (important economic siege not only for Milano) along Dante street, characterized by various restaurants and shops, that links the square to Sforza Castle (Castello Sforzesco in Italian), one of the symbols of Milano, that has a big artistic and historical importance (it was the siege of the various rulers of Milan). The Sforza Castle is the siege of various museums, from archaeological until modern art, in which there are works of important artists also famous all over the world like Leonardo da Vinci and Michelangelo Buonarroti; besides, it is also used for various both musical and artistic events.

Historical-artistic walking-tour in external, from Duomo square, characterized by the two covered walkways and by the monument of king Vittorio Emanuele II, that links the Duomo (the Cathedral of Milan) to the Gallery Vittorio Emanuele II; we'll visit by external the Duomo, one of the symbols of Milan, religious heart of the city, rich of history and architectural and sculptural art. We'll walk then along Corso Vittorio Emanuele, that links the Duomo with our final destination: S. Babila square, characterized by various shops and by the presence of the church S. Carlo al Corso and by the rests of the Herculean Thermal Baths. Finally we'll reach S. Babila square, where we'll visit in external the church of S. Babila that gives its name to the square.

A walking tour through basic Milano, starting from the Palazzo della Ragione, heart of the medieval city, heading to the Sforza Castle, once a fortress and gorgeous noble residence. Passing by the Duomo, the spectacular Gothic Cathedral symbol of Milano, the Galleria, a monumental luxury shopping-center, the La Scala Theater, one of the most famous opera and ballet house in the world, and the artists' quarter in Brera, with its picturesque corners, cool boutiques and typical restaurants.
An itinerary through history, art, culture, music, fashion and good food, to be able to say you really know Milano.

December 29: The monumental face of nineteenth-century Milano and the intended use of the Sforza Castle and the treasures of Parco Sempione

The tour, mainly on the outside, aims to highlight the expansion and development of the nineteenth-century city from the point of view of the definition of the historic and monumental center, starting from the urban and economic center of capitalism and the rising city bourgeoisie, symbolized by the institutions of credit of Piazza Cordusio, to then proceed through the axis of travel of via Dante, specially created by the Urban Plans of the time, aligned with regimes of hygiene and urban decor, towards the barycentric area of ​​Piazza Cairoli and Foro Bonaparte, scenario of opening of the Sforzesco Castle. Entering it, we will observe the first defensive, then residential, and finally museum civic structure with its cultural institutions present, starting with the Rondanini Pietà Museum, inaugurated with a view to MilanoExpo 2015 in the former Spanish Hospital in Piazza d'Armi. It is a very modern setting, now completely renovated but which still retains the charm of history. After a walk inside the Piazza d'Armi, the Ducal Court and the Rocchetta Courtyard, we will leave the Porta di Barco and the famous "telescope" until we reach the Sempione Park, we will look for the Park Library, the Arena, the Ponte delle Sirenette, the Palazzo dell'Arte, the Branca Tower, where one of the towers of Milan stands out, built by Gio Ponti in 1933 and renovated by the Branca brothers starting in 1985, to then conclude under the triumphal arch of the Arco della Peace.

The tour, entirely outdoors, aims to enhance the historical, architectural and environmental heritage of the south-west quadrant of Milan, along the Duomo-Carrobbio-Ticinese route.
We start by getting on tram no. 3, and during the journey the testimonies of the religious architecture of via Torino will be presented: S.Maria at S.Satiro, S.Sebastiano, S.Giorgio al Palazzo, the Carrobbio and the axis of the Ticinese with the Columns of S. Lorenzo.

At the descent of the stop a short foray into the Parco delle Basiliche to admire the complexes of S. Lorenzo, S.Eustorgio and the Diocesan Museum.
Following, the discovery of the neighborhood and its history, with the characteristic railing houses that are now very redeveloped, the courtyards and the alleys, the Conca di Viarenna as evidence of the past of the waterways and the entrance of Candoglia marble into the city. .
Then entering Piazza XXIV Maggio along the new project of the redeveloped dock with a view to Milan Expo2015, the touristic and territorial route of the Alzaie del Naviglio Pavese and Grande opens up and a passage to the main attractions of the area: Conchetta, Vicolo Lavandai, Chiesa di SM delle Grazie al Naviglio, Center of the Engraver, Casa Merini, Ponte dello Scodellino.

Notes on the project to reopen the Milanese canals, progress, the sections concerned and the territorial system of the 5 canals of Lombardy.
Closing in Piazza XXIV Maggio under the Cagnola door, in the places of the Milanese nightlife. 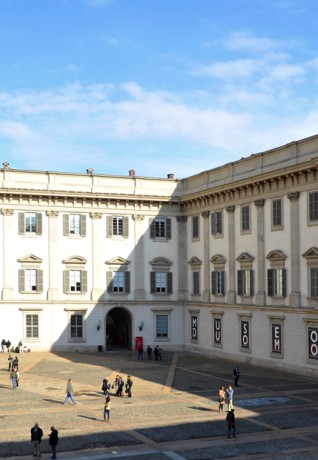