This week: Covid-tested flights, Milano Digital WeeK, the city as a movie set

Every week, three news items on the upcoming future of Milano and its metro community

There are now Covid-tested flights between Milano and New York

With the new travel protocol approved by the Italian Ministry of Health this month, the experimental phase of Covid-tested flights between Malpensa (MXP) and New York airports has taken off.

It covers travelers flying from Milan to NYC, and from NYC to Milan.

While boarding at the Malpensa airport, travelers must present proof of a negative result for either molecular testing (RT PRC) or antigen testing for SARS-CoV2, undertaken in the 48 hours prior to the scheduled flight.

In particular, passengers arriving from New York to Malpensa will be able to avoid the quarantine required for incoming travelers from the United States, by taking at antigen test (RADT) which is administered directly at the airport upon arrival.

If the new travel method gives the hoped-for results, the idea is to extend it to all routes to the United States.

Thus Armando Brunini, CEO of SEA: “Milan - New York is the intercontinental route that has the highest frequency of flights and number of fliers for Malpensa. We hope that this experimentation phase will be the first step towards an expansion of Covid-tested flights to the US and elsewhere, which we believe are essential to support air traffic during this still difficult phase of the pandemic".

Manhattan and Milan are rejoined again!

Milano Digital Week 2021 and the equitable and sustainable city

The fourth edition of Italy’s biggest all-digital event will start on March 17 and end on March 21 and revolve around the theme of the “Fair and Sustainable City”.

The pandemic has not affected the format, because the event has always been in an online mode since the first edition in 2018.

The event, featuring 200 speakers and dozens of lectures and panels, is promoted by the Municipality of Milan working together with IAB Italia, Cariplo Factory and Hublab, and is sponsored by Intesa Sanpaolo Bank.

The initiative aims to involve a wide audience of industry experts and interested individuals, also considering the growing importance of distance working one year after the onset of the pandemic.

"Digital has shown its potential in 2020 and in 2021 its role will be even more decisive in redesigning, rebuilding and reinventing our present and our future," said Roberta Cocco, City Deputy for Digital Transformation and Civic Services, to Domus design magazine, content partner of the initiative.

The topics covered by the lectures and panels of Milano Digital Week range from cybersecurity to privacy, from big data to business transformation, to arrive at the contribution that digital technology can give to the achievement of the circular economy and climate sustainability.

Milano is in demand as a film location

The Milano Statale, Piazza Duomo by the Gallery, the Boulevard that goes to the Central Station (dressed as 42nd street in NYC, with yellow cabs and all), these are some of the Milano locations for the film “House of Gucci” directed by Ridley Scott, which saw Lady Gaga (as Patrizia Reggiani) and Adam Driver (Gucci) acting in downtown Milan, for the pleasure of the crowd.

The pictures show a recreation of Milano in the 1970s, folksier but stylish as always, on the eve of the fashion boom.

Despite the pandemic, Milano confirms its ascendancy as film location for major Italian and international productions.

In fact, 2020 has not marked a significant decline, with the number of TV fiction productions unchanged and an increase in the making of documentaries in Milan. Thus the Milanese daily Corriere della Sera: "The film on Maurizio Gucci with Lady Gaga in the part of Patrizia Reggiani, the third season of 'My Brilliant Friend”, and the Rai movie on the life of Scala dancer Carla Fracci. Three clues make a case: Milano remains coveted as a movie set even in pandemic times."

Among the feature films recently produced in Milan is the historical biopic "Napoleon 1769-1821" with scenes shot in the Sforza Castle, when Bonaparte ruled the city between 1796 and 1812.

Popular film locations are the Duomo and the Galleria, the Castle and the Sempione Arch, Piazza Affari and Piazza Mercanti.

Milano was made popular as a movie setting especially by Luchino Visconti with his “Rocco and His Brothers” (1960), where you can watch Alain Delon and Annie Girardot sit on the roof of the Duomo in what once was an industrial metropolis attracting hundreds of thousands of people from the rural South to work in its factories.

The city’s neighborhoods and canals are all great settings for dramas and comedies in the radial city of hundreds of dialects and languages spoken under the fog and the sun, where hypermodernity and historical tradition live side by side, sometimes within the same Milano dweller. 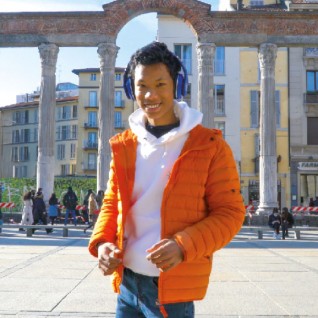