Every year, at Carnival time, he reappears to celebrate on the streets. "Meneghin", diminutive of the name Domenico, is the Milanese fancy dress costume par excellence.

Flanked by Cecca, together they make a lovely couple. He wears a tricorn (three-cornered hat), a wig with a ponytail, a long reddish brown jacket, green pants above the knee and red and white striped socks. Under his jacket, he wears a yellow shirt with lace edging and a kerchief around his neck. His shoes are brown with a large front buckle.

Already a popular costume in the '600s, Meneghino appears on stage as a devoted servant, loyal to his master's orders but at the same time he is eager to maintain his freedom and is intolerant to any abuse.
Although bold in words he is good-natured and capable of charitable impulses, inclined to talk with others and make friends easily. He does not hide his face, he faces everyone openly. The empathy that he inspires in others is the result of his genuine hard work guided by honesty and not greed. Thus, he perfectly embodies the spirit of Milano and the city has willingly adopted him.

Meneghino was part of the history of Milano, especially during certain chapters, so in the mid-nineteenth century he also became a symbol of the patriotic spirit of the Milanese against the Hapsburg domination. 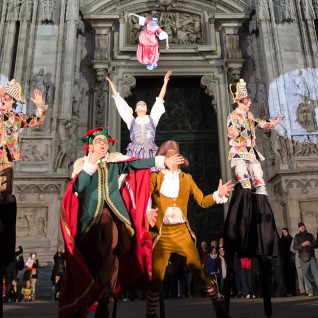