The Milano skyline is transformed

From the Duomo to City Life: view the city from another perspective 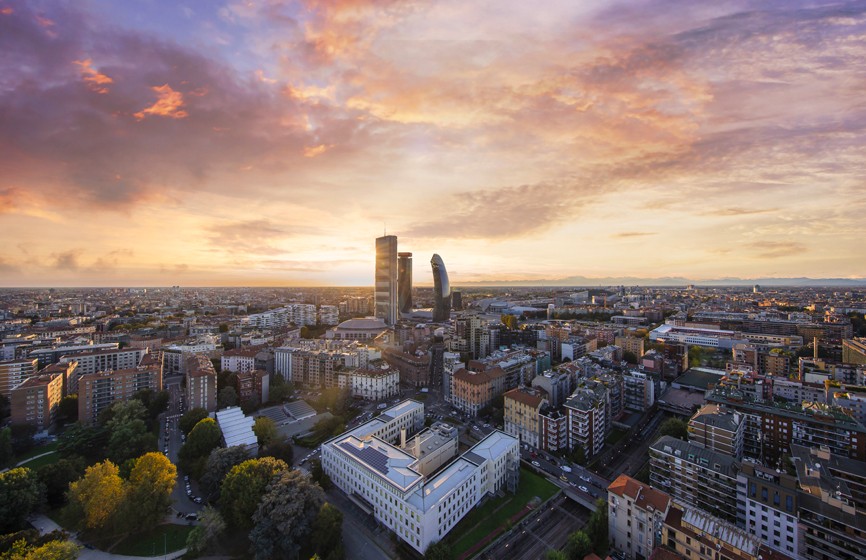 Change is being felt everywhere in Milano; from the underground, where the new subway lines are being constructed, to the impressive skyline that changes with the passing of the seasons.

Historically, Milano’s Duomo was once the tallest building in the city. Indeed, until the first half of the 20th century there was even a “law” that prohibited new constructions from being higher than the Madonnina, which stands at 108.5 metres. Since then, much has changed and skyscrapers have burgeoned: here is the story of the city seen from above, and all the buildings you definitely should not to miss.

The term grattacielo (skyscraper) was first used in Italy in 1923 with the construction of the Gemelli diversi in Milano: two splendid Arte Noveau-style edifices that can still be admired in Piazza Piemonte. These ‘twin’ constructions heralded the city’s first architectural revolution.

On the occasion of the V Triennale in 1933, the architect Gio Ponti created the distinctive Branca Tower. A futuristic tower that was a work of art, made entirely of steel, within Parco Sempione. Visitors can take the lift, which rises to 108 meters in less than a minute, for access to the spectacular belvedere: it is considered one of the most evocative places to see Milano from above.

The first real skyscraper in Milano, which at the time was the tallest in Italy, was built in 1955: the 31-floor Torre Breda, 116.25 metres high, in Piazza della Repubblica.

This record lasted until 1960, when the Pirelli Skyscraper was built which, at a height of 127 meters, achieved its goal of being ranked the tallest skyscraper in Europe. Designed by Gio Ponti, it was always known as the Pirellone (literally: Big Pirelli) for its grandeur, and the concrete and steel giant dominated the city until the 2000s.

The belvedere on the 31st floor is open to the public on special occasions during the year, and visitors can enjoy the view of Monte Rosa, the Grigna mountain and the Prealps, together with Milano’s characteristic sights: the Duomo, the Torre Velasca, the San Siro stadium and the other city skyscrapers.

Fascinating fact: a pair of peregrine falcons have nested high up on the Pirellone and, every year between the end of February and the beginning of March, they return to the top of the skyscraper to lay their eggs. They have been named Giò and Giulia, after the architect who designed the tower and his wife, and they can be followed “live” thanks to two webcams that are pointed at the nest: you can see them here and here.

Another very special skyscraper, the Torre Velasca, was built in more recent times. In 1958 the renowned architectural firm BBPR designed the landmark edifice which the Milanese nicknamed “la torre con le bretelle” (the tower with braces). Its unique “mushroom” shape, where the upper part is supported by beams that look like braces, has always divided opinions in the city due to its unusual appearance.

Upon completion of its restoration in 2022, it returned to its former glory with amazing original colours: the reinforced concrete is now back to its original shade of pink, the stone and brick mosaics of the panels reflect the sunlight especially at sunset, just like the marble from the nearby Duomo.

City Life and the new district designed by archistars

On the grounds of the former Fiera (trade fair), a new neighbourhood was created that added three skyscrapers to the Milano skyline: the CityLife District.

The three towers, which house large corporate offices, each have a striking identifying characteristic. The 50-floor Isozaki Tower, nicknamed the “Straight”, designed by Arata Isozaki, stands 209 meters high. The Hadid Tower, the “Twisted”, designed by Zaha Hadid, has 44 floors and measures 177 meters with a sinuous curve that gradually straightens as it increases in height. The third, the 175-meter Libeskind Tower, called the “Curved”, designed by the American architect Daniel Libeskind, has a very original shape as it inclines forward and is topped with a Renaissance-inspired cupola.

The towers are surrounded by the largest Shopping District in Italy, with shops and restaurants, a residential district - also designed by Zaha Hadid - and the CityLife park, which is a fascinating open-air contemporary cultural itinerary.

Another building under construction to the rear of these skyscrapers, with completion expected by 2025, is the cutting-edge CityWave, or the “Sdraiato” (Lit: laid back). Consisting of two buildings connected by a curved roof structure that creates a covered walkway, it will be the first office building to hit its zero-impact target as it will be powered exclusively by energy from renewable sources.

Photovoltaic panels will cover the entire structure suspended between the East and West buildings, becoming the largest urban photovoltaic park in Italy, an internal recycling system will use rainwater and the heat of the groundwater, and all the structures are designed to consume 45% less energy. The future is already upon us!

Porta Nuova area was the first Milanese district to host several skyscrapers. At its centre are Piazza Gae Aulenti and the Biblioteca degli Alberi (Library of the Trees).

Palazzo Lombardia was built in 2010, a 161-metre-high tower in reinforced concrete, steel and glass surrounded by lower curvilinear buildings that enclose an oval-covered and transparent piazza: it is the largest covered square in Europe.

In 2014, the skyline became even more spectacular with the Unicredit Tower which totally redesigned Piazza Gae Aulenti. 231 metres high, designed by the Argentine architect Cesar Pelli, its iconic spiral spire has become the most characteristic feature of the new Milanese skyline.

It was soon followed by the inauguration of what has become one of the most famous skyscrapers in the world and the new symbol of Milano: the Bosco Verticale (Vertical Forest). Two residential high-rise buildings clad with a “forest” of 800 trees. Plants, producing humidity and oxygen, absorb CO2 to reduce urban pollution.

A visionary example of contemporary architecture, it has won numerous awards, including the most important in 2015, when it was named the “most beautiful and innovative skyscraper in the world” by CTBUH in Chicago. In 2019 it was ranked as one of the fifty most iconic skyscrapers for innovation and for environmental sustainability. Together with the Duomo, it is the building most photographed by Milanese and tourists.

In recent years, other skyscrapers have been added to redesign the skyline in this area: the Gioia22, designed by Pelli Clarke Pelli Architects and nicknamed “the shard of glass” due to its particular shape, is a 121-metre-high building with 30 floors; its silhouette widens as it rises upwards with a prismatic sail shape on one side. Built with a focus on sustainability, the building is surrounded by integrated cycle paths plus pedestrian and green areas.

Another architectural gem in Porta Nuova is the Nido Verticale, or Unipol Tower, designed by Mario Cucinella Architects, which stands 125 meters high with 23 floors. Almost completed, its structure in timber, steel and glass which culminates in an immense slanting “porthole” is already captivating. The interior hosts elliptical terraces with facing gardens on one side, and full sustainable credentials are ensured: the building’s skeleton is formed by a double skin envelope with a central cavity that insulates from the cold and the summer heat. A panoramic roof-top greenhouse and garden is a unique space that will be designated to public and cultural events.

The area is completed by three residential towers just beyond Via Melchiorre Gioia, called Torre Solaria, Torre Solea and Torre Aria plus the business centre that extends up to the Diamante, another 140-metre-high skyscraper, flanked by the two smaller Diamantini buildings, which overlook Piazza della Repubblica.

The impressive Fondazione Prada complex in the Porta Romana district stands out amongst its immediate surroundings. The brainchild of Miuccia Prada, created in 1993, aims to promote culture and contemporary art. In 2015 it inaugurated its museum, designed in a former distillery, by the Dutch architectural studio OMA, under the creative direction of Rem Koolhaas.

Three new buildings give this citadel of art its innovative character. La Torre, a striking asymmetrical glass and exposed white concrete construction, with nine floors that house the permanent collection of contemporary art, towers above the lower structures : the Haunted House, a four-storey building with a gilded exterior, a favourite photo opportunity for Milanese and tourists alike, and the Podium, a vast central two-storey space.

Absolutely not to be missed is Bar Luce, conceived by the famous director Wes Anderson, now one of the most instagrammed places in Milano.

The entire district is under transformation: the Olympic Village planned for the 2026 Milano - Cortina Winter Olympics will be constructed directly in front of the Fondazione Prada tower, and the Bocconi University maintains an increasingly future-oriented presence in this area.

The transparent façades favour the interior-exterior connexion, and play on curved lines that create buildings which take shape within the open-air courtyards in order to optimize and reduce the use of artificial lighting. Here too sustainability has been a leading factor in the design, ensuring energy self-sufficiency.

Another important renovation taking place in the Porta Romana area is the construction of the new piazza dedicated to Adriano Olivetti as part of the Symbiosis project, built in the Scalo Romana area, in the vicinity of the Prada Foundation. The 13,000 sq mt piazza is enhanced by LED-lit paths, shared electric transport, ponds and trees. Technology and eco-sustainability are the key points of the project. Wi-fi connections and recharging stations for smartphones and tablets will be accessible, along with benches equipped with multimedia connections.

There are other important innovations planned for the future of the Porta Romana district. The construction of the new A2A headquarters in Milano will be completed in 2025: the Torre Faro will be designed by architects Antonio Citterio and Patricia Viel.

The imposing 144-metre-high tubular skyscraper will have an original feature, a “split” at a height of about 60 meters, where a 3-floor sky garden will have one open side. It will also boast a top-floor viewing platform, accessible to the public for a breath-taking view of the city’s new district in transformation. 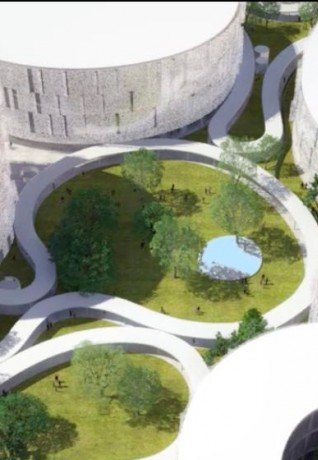