Accessible itinerary: the heart of the city

From Piazza Duomo to the Castello Sforzesco

It is the "classic" itinerary for the tourist who has just arrived in the city and the most exciting and the richest in suggestions.

The starting point of this itinerary is Piazza Duomo.

There are no parking spaces reserved for people with disabilities.

The itinerary starts from the Duomo, the Cathedral of Milano dedicated to Maria Nascente, the fourth largest church in Europe.

The first stone was laid in 1386 by the will of the Visconti, the lords of Milano, but it was consecrated only in 1577 and the works on the facade were completed in 1813. It was one of the most colossal construction sites of all time, still open today due to the continuous restoration works. The first element that catches the eye is the abundance in decorations: more than 3,400 statues, of which about 2,300 outside, 96 giant gargoyles and hundreds of high-relief sculptures.

Inside you can admire impressive polychrome windows depicting the main scenes from the Bible.

The Duomo Terraces are worth a visit: from there, located at a height of 70 meters, you can enjoy a spectacular view of the square and of the city skyline. The path winds through the spiers and allows you to get under the famous Madonnina (or Madunina).

The "Madunina", the undisputed symbol of the city, is a large gilded copper statue standing on the highest spire of the Duomo.

Looking at the facade of the Duomo, on the right, there is the Museo del Novecento, inaugurated in 2010 and located inside the Palazzo dell'Arengario, renovated to host some of the most important paintings and sculptures of the 20th century.

The last section of the museum, dedicated to Arte Povera (Litt. Poor Art), is located in a wing of the Palazzo Reale that can be reached by a suspended walkway that offers an incredible panoramic view of the Duomo.

Adjacent to the Palazzo dell'Arengario is Palazzo Reale, built by architect Giuseppe Piermarini and venue of the most important and prestigious temporary exhibitions set up in the city. The building was heavily damaged by the allied bombing of August 1943, but a careful restoration project has brought it back to its former glory.

Do not miss a visit to the charming Sala delle Cariatidi, named after the forty statues that decorate the walls of this huge ballroom. To reach the entrance of Palazzo Reale, cross the square in front (cobblestone pavement with accessible paved paths).

On the ground floor of the Palazzo Reale, there is the Museo del Duomo: 26 exhibition rooms telling all the stages of construction of the cathedral, from its foundation in 1386 until the twentieth century. In addition to dozens of sculptures, which were once in the cathedral, you can admire stained glass windows, paintings, tapestries and embroidery, and terracotta models.

The museum was inaugurated in 1953, but the last renovation - with the consequent new layout - was made in 2013.

Dedicated to the king of Italy, for years it has been considered the fashionable "parlour" of the city. The mosaics and stuccos decorating the Galleria are worth a visit, especially today after the recent restoration that brought them back to their former glory.

At the centre of the Galleria, we suggest stopping at the famous "Ottagono", whose floor is decorated with a mosaic reproducing the coats of arms of the House of Savoia and the four cities that were the capitals of the Kingdom of Italy (Milano, Turin, Florence and Rome).

In the Galleria, before reaching Piazza della Scala, the last building on the left hosts the Leonardo3 Museum, where you can discover, in world premiere, the true Leonardo da Vinci artist and inventor, thanks to new reconstructions of his machines, the analysis of his manuscripts and some of his restored paintings.

At the exit of the galleria you reach Piazza della Scala, with Palazzo Marino, the municipal administration headquarters, and the famous Teatro alla Scala.

The theatre is named after the Church of Santa Maria alla Scala, demolished at the end of the 18th century to be replaced by the Nuovo Regio Ducal Teatro alla Scala, inaugurated on August 3, 1778 with the opera "L'Europa riconosciuta" by Antonio Salieri and where, over time, Giuseppe Verdi, Arturo Toscanini, Claudio Abbado and Maria Callas performed. Severely damaged by the allied bombings of 1943, the revival of the theatre became the symbol of the rebirth of the city.

The Museo del Teatro alla Scala is also worth a visit.

To the right of the Teatro alla Scala, stand the Brentani and Anguissola Antona Traversi buildings where you can visit the Gallerie d'Italia, famous for their artistic and architectural beauty.

The fine decorations of the two buildings - such as marble, stucco and bronze made between the 18th and 19th centuries - are worth the ticket price.

The exhibitions inside, set up with the collections of the Cariplo Foundation and Banca Intesa Sanpaolo, include, among others, some splendid bas-reliefs by Antonio Canova and paintings by Francesco Hayez and Giovanni Segantini.

If you walk through the Galleria Vittorio Emanuele in the direction of Piazza del Duomo and turn right along the arcades and cross Via Mengoni, you reach Piazza dei Mercanti, where you find the Palazzo della Ragione.

This beautiful square was created as a centre of city life in medieval times, at the behest of the mayor, who wanted to build there the building for judicial activities; in the middle of the square there is a 16th century pit.

After a short stop in Piazza dei Mercanti, you can continue the itinerary towards the Biblioteca and Pinacoteca Ambrosiana: on the right of the square take the Passaggio Scuole Palatine (pedestrian crossing with uneven paved pavement and tram rails), then take via Cesare Cantù (paved sidewalk) which leads you to Piazza Pio XI, where the Pinacoteca Ambrosiana is located.

Piazza Cordusio and Via Dante

Coming out from the Pinacoteca, go through via Cantù in the opposite direction, turn left in via Orefici and after 50 meters you are in piazza Cordusio. There your attention is captured by the valuable buildings surrounding the square, buildings of the world of banking and finance, built between the late nineteenth and early twentieth century when Milano took on the role of economic capital of Italy: Palazzo Broggi, which used to be the seat of the Milano Stock Exchange from 1900 to 1932, Palazzo delle Assicurazioni Generali, Palazzo Biandrà and Palazzo del Credito Italiano.

Walking on the left sidewalk of the square and crossing via Cordusio (crossing with uneven paving), once you get back on the sidewalk you will find a tourist totem with useful information on the roads and monuments in the area. From there, cross via Dante (crossing in uneven paved with tram rails), pass under the monument dedicated to Giuseppe Parini and after a second crossing (uneven paving) take the pedestrian section of via Dante (about 200 meters long, paved on the two sides and cobblestones in the central part), where you can take a break or do some shopping.

Consider visiting the courtyard of the Piccolo Teatro Grassi, at 2, via Rovello, the first permanent theater in Italy founded in 1947 by Paolo Grassi and Giorgio Strehler.

You then reach Largo Cairoli where the equestrian monument dedicated to Giuseppe Garibaldi stands, a bronze group made in 1895 by the artist Ettore Ximenes.

Crossing the square is quite complex for wheelchair users: it is advisable to keep to the right of the Giuseppe Garibaldi monument (two consecutive crossings with uneven cobblestones and tram rails). A further crossing (with a short sloping section) allows you to reach the square.

From here, walking through via Luca Beltrami, you reach piazza Castello (a pedestrian area); turn around the "Torta degli sposi", the large fountain in the centre of the square, to reach the entrance (slightly sloping section) of the Castello Sforzesco, one of the most famous symbols of Milano and its history.

The Castello Sforzesco, built at the behest of Galeazzo Visconti in the second half of the fourteenth century, was later enlarged by the new lords of Milano under the guidance of Francesco Sforza.

He transformed the building into a military citadel, entrusting the construction of the high tower to architect Antonio Averlino, also called "il Filarete", which today welcomes visitors to the main entrance of the Castle.

Over the centuries, the original structure has undergone many demolitions, reconstructions and restorations. Only at the end of the nineteenth century, when the complex was purchased by the city of Milano, the external fortifications were demolished and further restorations were carried out which transformed the Castle from a military building to a place of culture.

The interior of the Castle is made up of three courtyards (cobblestone with paved paths). It hosts some very interesting museums, including the Museo Egizio and the Museo di Arte Antica, where it is possible to admire the "Sala delle asse" where Leonardo da Vinci painted a large pergola of eighteen mulberry trees, which are intertwined on the vault of the Hall holding up the emblem and the Sforza's coats and arms.

The Hall has been restored and reopened to the public for the 500th anniversary of the artist's death.

Also worth a visit is the Museo della "Pietà Rondanini", an unfinished masterpiece by Michelangelo Buonarroti, located in the ancient Spanish hospital.

After visiting the Castle and its museums, enjoy a little relaxation in the greenery of the Parco Sempione, designed by architect Emilio Alemagna and accomplished between 1888 and 1894.

The park, romantic "English" in style, has a rich arboreal and shrubby collection, is entirely fenced and has many recreational spaces.

Along its perimeter, there are important historical buildings and Milanese institutions, such as the Arena Napoleonica, the Aquarium, the Torre Branca, a Municipal library, the Teatro dell'Arte and the Triennale.

The Arena Civica "Gianni Brera" is inside the park. It was created and designed by architect Luigi Canonica and it is the place where, in 1910, the newly born national football team played its first match against France. Most of the paths inside the park are dirt paths, with slight sloping sections.

From the Castello Sforzesco you can take many public transportation:

For information on accessibility for passengers with disabilities, please visit the ATM web site.

Piazza Castello is a pedestrian area where cars are not allowed. Nearby you can park in via Quintino Sella where there are two parking spaces reserved for disabled pass holders. 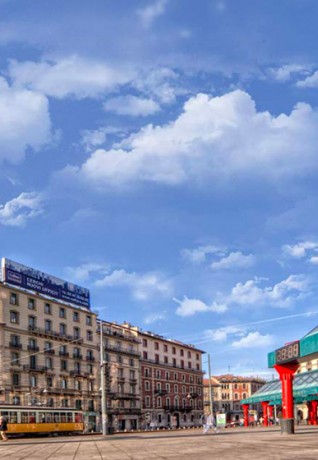 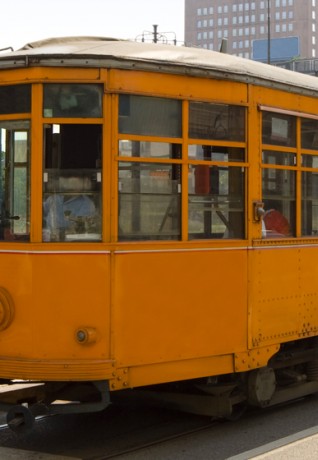 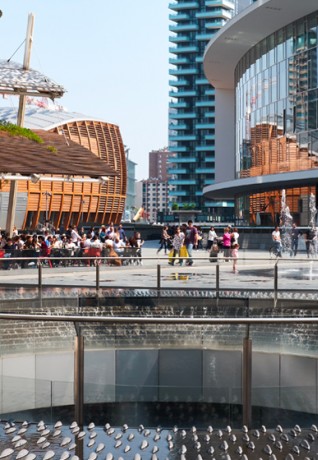 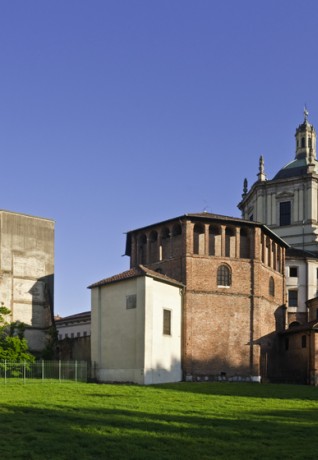 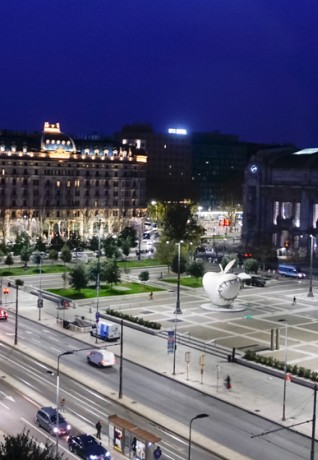 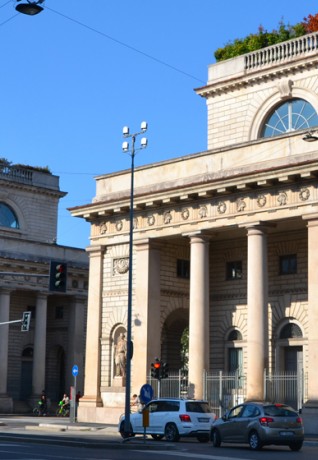 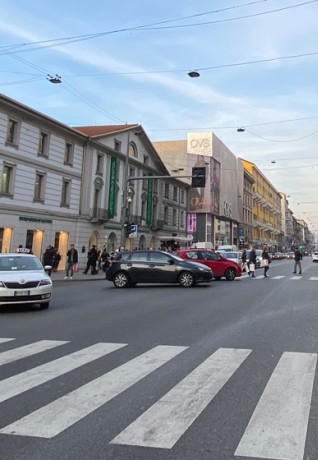